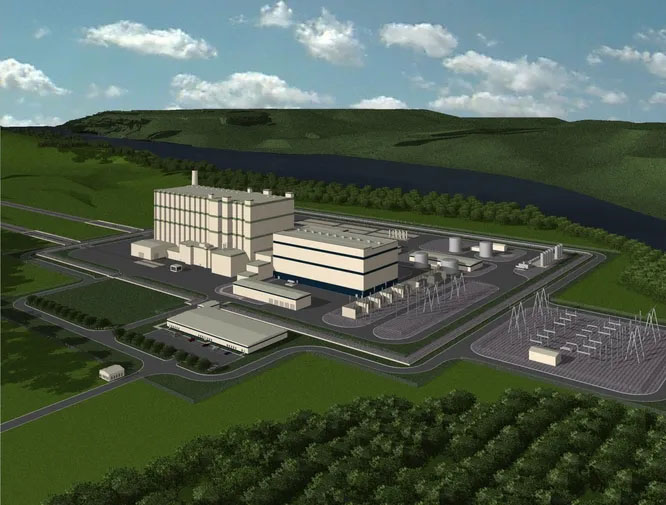 Why is one of the richest people on Earth investing in a new type of nuclear power plant? The small town in Wyoming will be home to an experimental project – Bill Gates’ nuclear reactor. TerraPower, based in Bellevue, Washington, will build its Natrium facility in Kemmerer in southwestern Wyoming

The Kemmerer reactor will be the first to use an advanced nuclear design called Natrium. It was developed by TerraPower in conjunction with GE-Hitachi. Instead of water, it will use liquid sodium as a cooling agent. It has a higher boiling point and can absorb more heat than water. It is known that no high pressure is generated inside such a nuclear reactor, which reduces the risk of explosion. Those promoting the idea of ​​molten salt nuclear reactors are confident that they will become the backbone of carbon-free green energy.

This plant is also smaller than conventional nuclear power plants. Therefore, its construction should be faster and cheaper. TerraPower aims to bring the cost of its plants down to $ 1 billion. That is a quarter of the budget for its first plant in Kemmerer.

Bill Gates, Microsoft’s co-founder and chairman of TerraPower, announced plans for a project in Wyoming in June along with officials from Rocky Mountain Power. Following this announcement, four cities from Wyoming entered the competition.

Power generation with molten salt reactors In Kemmerer, Naughton’s coal-fired power plant, operated by PacifiCorp’s Rocky Mountain Power subsidiary, is slated to close in 2025. The project will employ 2,000 people during construction and 250 people after launch. If the new nuclear power plant is as reliable as a conventional plant, the 345 megawatt plant will generate enough clean energy to service about 250,000 homes.

Proponents of the idea of ​​generating energy from molten salt reactors with sodium coolant and energy storage on molten salts say they will work better, safer and cheaper than traditional reactors . The high heat transfer properties of sodium will allow the Natrium equipment to be air cooled. This will allow the plant to shut down quickly in the event of an emergency. The absence of emergency generators and pumps will save costs.

Others are skeptical about the benefits of sodium over water for cooling, as in conventional nuclear power plants.

There are a lot of problems with using liquid sodium. It is a highly volatile material that can catch fire on contact with air or water.

Bill Gates has repeatedly emphasized that neither solar nor wind farms by themselves will ensure the transition to “carbon-free energy”. First, most of the energy today is used in the form of heat. The conversion of electricity to heat is a new waste. Secondly, the generation of electricity from the sun and wind is unstable. Large-scale storage is needed to balance production and consumption. And here the Natrium project has another very serious plus: it already includes such a drive.   In fact, this is a hybrid system that includes a fast neutron reactor and its thermal energy storage in the form of a large container with molten salt.

Estimates of the cost of heat accumulation in such melts vary greatly, but rarely rise above $ 75 per kWh of electrical energy (and $ 25 for “thermal” kWh) – four times cheaper than lithium batteries. Losses of heat accumulators in the molten salt are only 1-5% per day, depending on the ambient temperature. In addition, if used judiciously, a molten salt storage facility will work well for decades, whereas lithium-ion batteries are not designed for that period.