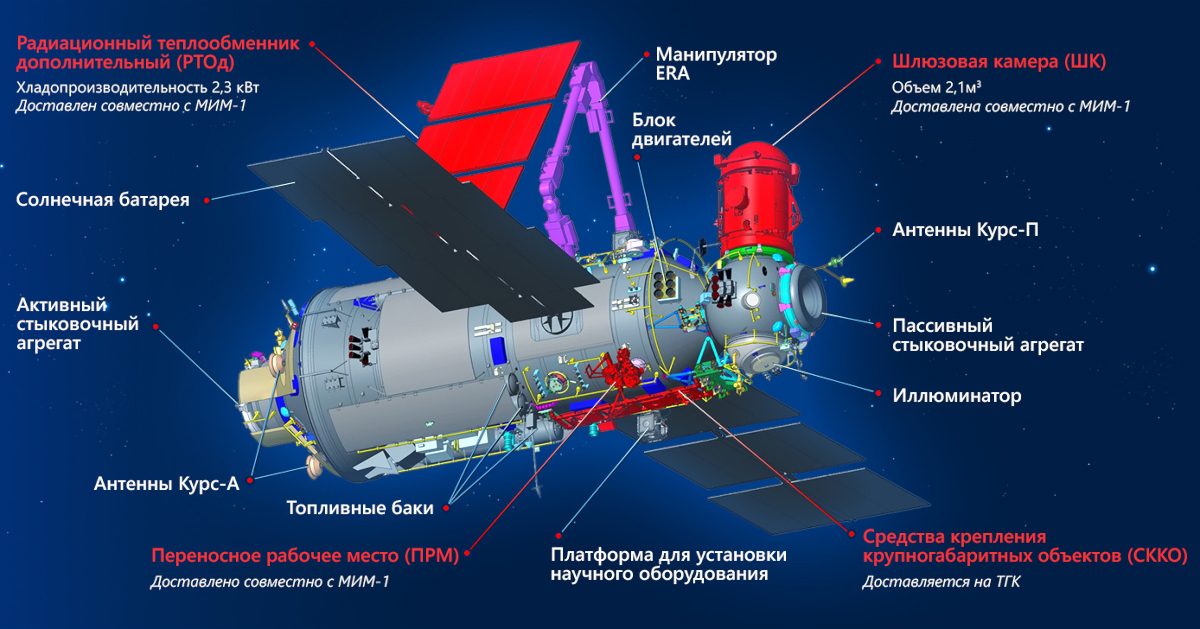 Multifunctional laboratory module “Science” (“Nauka” in Russian) is the latest addition to International Space Station (ISS). What do we know about it?

This saga began 26 years ago . The module was originally created as a backup for the Zarya basic module. And he was 80% ready by the time it became clear that he would not be needed in such a role.

In 2004 it was decided to return to the idea of ​​launching, before that the module had been remade for new purposes. And then it began … Initially, the launch was planned for 2007. However, either the purpose of the module should be changed, or metal filings have been found in pipelines , or in tanks. Then it turns out that such tanks are no longer produced and it is necessary to conjure with the old ones. Then some rubber parts managed to deteriorate. New tanks still need to be made, and so on.

In the interval between incidents, in the 12th years, a long 11-meter manipulator arm of European production European Robotic Arm was installed on the module . This will reduce the need for costly, heavy and dangerous space walks. Although, to set up the module, you will still need about 10 outputs. But with the help of the “hand”, for example, they re-connect the airlock to the “Science” from the “Dawn” module.

– This will be one of the largest modules of the ISS. Weight is more than 20 tons, length is 13 meters, and diameter is 4.2 meters. Volume 70 cubic meters.

– A spherical docking module of the Pirs type is connected to the module immediately on the ground. The old Pirs, which was docked at the Nauka site to the Zvezda service module, will be flooded in the coming days.

– There is a “workshop” and several universal jobs.

– The module is capable of producing oxygen and water. Forgive the fastidious, but from what stands out from the crew.

– There is a porthole.

– Equipped with an extra bed.

– In addition to the manipulator, there is a solar battery outside, a heat exchanger similar to it, external platforms for attaching scientific equipment and large-sized objects.

Comments about the toilet

You can often hear notes and even whole suites of sarcasm about the fact that there is an additional toilet inside “Science”. Like, that’s another achievement. There are several comments on this.

First, a space toilet is a really complex engineering facility. And ours are the best in this delicate matter. On the same ISS, Americans now and then ask to go to the bathroom of the Russian segment due to breakdowns in theirs.

Secondly, Roskosmos is increasingly hinting that the domestic segment of the ISS after the 25th year has a tourist future. If you are a fan of camping on Earth, then you can go to space on the beautiful and new ship of Elon Musk Crew Dragon and a couple of days of flight to the station to relieve yourself, acrobatically docking to a special gadget right above your fellow crew members. Another thing in the “soviet” Union: you can do all the work even in a microscopic, but a separate room.

In light of this, an additional bed and a bathroom in the new module come in handy.

A lot of scientific experiments are planned on the module. For example, there is an experiment called the ominous “Vampire” . But this is just an expanded acronym for “rotating magnetic field”. As a result, infrared sensors for remote sensing devices will be developed. Even in zero gravity and in a centrifuge, quail eggs will be raised to study embryogenesis. This will come in handy for colonizing the galaxy in the future.

Colonization is impossible without nuclear energy in space. But there is a problem: in an airless space, it is impossible to cool the reactor, roughly speaking, to the environment. The ISS has already carried out the Kaplya experiment, in which they tried to dissipate heat with the help of a kind of “shower” . Small droplets of water flew through space, released energy through infrared radiation, and then captured. The Science module will take part in a similar experiment called “Drop 2”.

The module will be adjusted for about a year, and then it will be in service for 8 years, until 2030. That is, for 5 years more than Roscosmos plans to operate the Russian segment.